You Here! Uncategorized The Horror of Child Marriage: An Economic and Social Crises 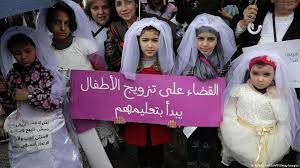 The Horror of Child Marriage: An Economic and Social Crises

Written by Aya Ozeir
Figure 1 Amidst an ongoing economic and social crisis, more girls are left to face the horror of child marriage.
Source: DW

With the socio-economic crisis heightening in Lebanon, more underaged girls have been robbed from their childhood and left to face the horror of child marriage.

Child marriage, as defined by the United Nations International Children’s Emergency Fund (UNICEF), is “any formal marriage or informal union between a child under the age of 18 years and an adult or another child.”

As reported by Plan International which develops children’s rights and equality for girls, poverty is the common reason for child marriage. Therefore, it is noticeable that in poorer societies, the phenomenon of child marriage is more prevalent in comparison to rich countries. UNICEF reported that nearly 40% of girls in the world’s poorest countries are married as children, twice the global average. Consequently, marriage is a mean to reduce the girl’s costs and financial burdens.

Digging deeper into the issue of child marriage, traditions and customs in patriarchal societies are also found as the root of child marriage. For instance, many societies and rural areas still adopt the mentality of ‘protecting women’s honor’ where they believe that women’s lives are the property of men and their families. When defining honor, there are several dimensions to take into account, and its definition depends on the cultural context of societies. For instance, the belief of being sexually active after menstruation in some societies can be considered a dishonor to the family. Therefore, marriage is considered as a form of protection of the family’s reputation. Besides honor, men are also perceived as the financial source, which not only makes women financially dependent on their husbands, but also applies social and economic pressure on men.

When it comes to assessing the legal aspect of child marriage in Lebanon, the Lebanese legal system applies the principle of multi-denomination where every sect has its own rules and courts. However, there is no legal and social prohibition of child marriage. If the girl is under the legal age, the man can marry her without having the marriage registered in the authorized records. Additionally, the Lebanese law considers minors under 18 years old as incapable individuals to engage in legal issues because s/he lacks recognition. Therefore, young girls fail to understand their legal and social rights and are consequently more submissive to their husbands.

The implications of child marriage are not limited to the child bride but extend to her descendants. If the girl is underage, her body is considered weak for pregnancy, therefore, putting her life and her child’s life at risk. The World Health Organization (WHO) reported that “Pregnancy and childbirth complications are the leading cause of death among girls aged 15–19 years globally. Adolescent mothers aged 10–19 years face higher risks of eclampsia, puerperal endometritis and systemic infections than women aged 20–24 years.” Additionally, WHO reported that babies who are born to mothers under 20 years old are also at risk of dire health conditions such as neonatal conditions and low birth weight.

Some cases from young married girls and their suffering during their marriage have been documented by the United Nations Population Fund. Marwa is a refugee who described the story of her divorce, her dispersion with her family, and her sick son who needs special care, she said: “I still felt like a child and loved to play, and I didn’t realize everything that was being asked of me at home from my husband and family.”

Despite child marriage still being prevalent in many Lebanese communities, many efforts have been trying to combat this issue. Feminist initiatives and organizations are currently attempting to legalize the prohibition of child marriage. Abaad, being an example of these organizations, has been working on the campaign titled “مش‭ ‬وقتها” which translates in English to “It is not the time”, in an effort to increase the legal age of marriage in Lebanon to 18.

Love us A trusted name for helping for the poor. We have been working project since 2000 to make the world equal At present we are on this